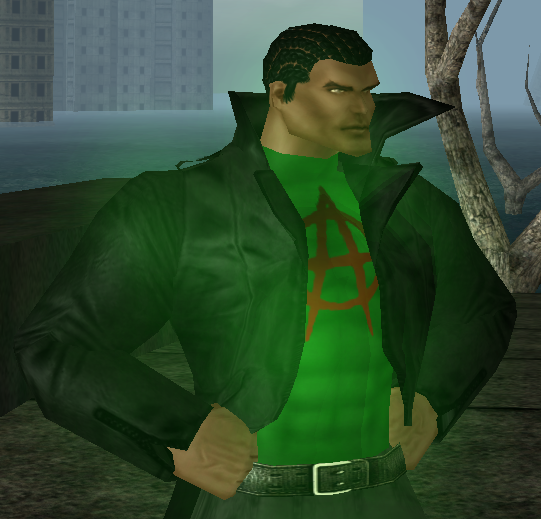 Obilian is an energy/energy aura brute. Brutes are melee fighters, so they get in up close and personal. His aura is based on Endurance, both using it and getting it. Energy fighting animation is a lot like Super Strength—there’s only so much fun animation you can do for punches.

As of this writing, he’s level 45. He’s boring to play, but I developed this backstory so I haven’t given up on him yet. When he reaches 50, I’ll probably put him away like I did with other 50’s in this book.

They took one look at him. The short, stocky man at the bar put away shot after shot, and they knew he was ripe for picking. Four on one. What were the odds?

The man hadn’t taken off his long trench coat even though it was warm in the bar. The four rednecks watched him like jackals watching prey that a lion would soon get around to. Finally, the man put both hands on the edge of the bar and shoved himself away. The bartender took his money while the man waved off change for a tip.

Rox got up first to follow the man out the door, and his three underlings, Josie, Bill and Pike followed at an arm’s length behind their fearless leader. The man in the leather trench left the bar, Rox close behind.

The bar sat on the edge of a lake, with motorcycles parked in front and cars relegated to the side and rear, where it was dangerous to park because of the shifting sands of the lake. More than one car had been swallowed by the marsh.

There were no alleys, no places to hide. So they walked right up to him.

The man kept walking to the end of the row of bikes, tucking a hand in his jacket. Rox stiffened as he only pulled out a set of keys. Rox pulled out his .357. “I said, I’m talkin’ to you, asshole.”

Now the man turned. His hair was cut short, his eyes dark in the progressing sunset. His face was a block on a thick, thorny stick.

“What.” It was a statement, not a question.

Rox waved the gun. “Gimme your money or I’ll have the boys rough you up for’t.”

The man rolled his eyes, dropping his keys back in his pocket. He stood with his legs spread evenly with his shoulders, and clenched his fists at his sides.

“Suit yourself,” said Rox, and the three men ran past Rox to tackle the other smaller man to the ground.

But he was fast, faster than they expected a man made out of cinderblocks could be. He caught Josie, who ran at him wildly, and tossed him right into Pike. He dodged Bill, who tripped and slammed face-first into the sandy marsh.

“In the first place,” said the man, “I have very little money.”

Pike got up first, and ran at him.  The man whipped an arm around with a loud “whoosh” of air and clotheslined Pike in the throat. Bill was spitting out sand as he got to his feet.

Rox clicked back the safety. It made an absurdly loud noise in the twilight.

Nothing. Rox turned the barrel toward his face, and the gun fired.

“Shit!” screamed Bill, running to his friend whose face had just been blown off.

In the commotion, the man in leather rode away.

Luck, supposedly, came to the fae in spades. Luck and an aversion to cold iron. As Obilian ran a red light, heading to his fleabag of a motel, he checked his mirrors to make sure that no one followed him from the bar. He really didn’t want the cops around, not right now. He was a stranger in this strange land of Albuquerque, too far south to his liking, and way too hot and dry. The fae didn’t belong here, and he knew it.

He got to the motel without incident. After parking the bike and locking it up, he went to his room on the second floor. If he could, he would carry his bike upstairs and keep it in the room, but there wasn’t enough space. He didn’t like that his iron steed was out alone. Although it was magicked, warded and locked, and had its own sentience, Obilian was not comfortable.

He unlocked the room, glancing inside before taking a long look at the bike outside. “Sorry, Peaches,” he muttered, going into his room.

A bed, a chair, a rickety three-legged table, and a TV on a